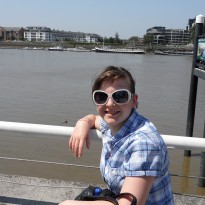 Update on Blood and Flames Series!!!

Hi everyone! I know I've been MIA for a while now. Due to entering my final year at university and a family bereavement, the edits for book 3 - Insidious Deceit - had to take a back burner for a while.

But I'm letting you know that I plan on releasing Insidious Deceit before the end of summer!!!!! I can't give a definite date yet as the cover for this book still needs to be finalised.

And because I don't have enough to do what with uni work and other commitments, I have also begun writing book 4 in the series!!!! (Just finished chapter 9 - just saying -and the word count it currently 31,662). Take what you will from the title of book 3.. It's a rollar coaster ride of Oh my frickin' shit, really? WOW!!!!

I will release a synopsis within the next week before I disappear next weekend (having to work is a killer isn't it?). I have to thank all of you for your support thus far and I hope that you aren't too mad that I've been out of touch for a while...

I spent all day thinking that I needed to give more.

So how about new covers for Fire and Fangs and Imperfect Harmony? Before the big cover reveal for Insidious Deceit...

Then I was also thinking, why not make things a little easier for people to get their hands on the whole series so far upon the release of Insidious Deceit?

I'll be able to give a more concrete release date in April once essays for uni are handed in. :)

Don't forget that I'll be posting a synopsis for Insidious Deceit within the next week...